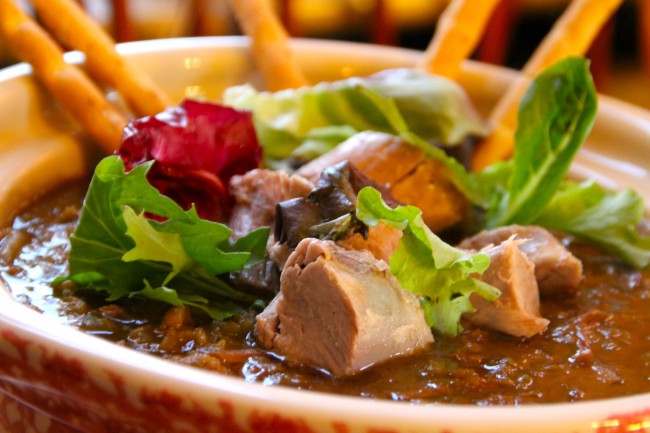 ~ 1 Lb of split peas (washed and soaking for 1-2 hours in hot tap water)
~ 5 cups of stock from fresh pork shoulder cooked overnite or 8 hours in a 275 degree oven. Cover shoulder in a large pan with 1 liter of ginger ale and water to almost cover pork shoulder.
~ Several sprigs each of rosemary, thyme and sage.
~ One large or two medium chopped onions
~ Two to three cups of pork shoulder diced to your liking.
~ Two tablespoons of beef stock paste (Knorr, LeGout or Minor’s are three fairly easily found). You can use salt to flavour instead, but I suggest you always keep chicken and beef stock in your fridge for so many different recipes that make an enormous difference in taste.
~ Two tablespoons of fresh ground pepper.

Add peas and onion to the boiling stock and let look for 3/4 of an hour covered. Add remainder of ingredients and cook for another 3/4 of an hour. Add water if it becomes to thick. If it is too soupy, remove cover and allow soup to thicken. Taste and adjust the seasoning.

Simmer duck carcass for 2-3 hours covered. Remove carcass, let cool and take off all skin and meat to put back in the stock. Strain the stock first through a fine mesh sieve. After putting skin and duck meat back in stock, add one large chopped onion and 2-3 cups of chopped greens of choice. I used organic romaine lettuce. I also added one chopped sweet red pepper. Simmer for another hour and season with salt and pepper.

Stack 5 sheets of phyllo dough, brushing each one with melted butter. Place a piece of pork cut as shown in above video on the phyllo dough and top with a soft cheese half the volume of pork medalion. I used St. Andre Triple Cream Cheese (Brie). Cut phyllo dough with enough room to cover cheese and pork (again see video – worth a thousand words). Bake in a 350 degree oven on a baking sheet lined with foil and buttered by hand for approximately 25 minutes or until golden brown.
While this is baking, make a cheeze sauce by placing in 1/2 cup of half and half (or heavy cream), 1/2 cup of sour cream and 1/4 cup of brie cheese (remove rind) in a small sauce pan. Put on a very low fire and stir often as to assure it does not burn. Keep covered as well. Drizlle this sauce over the pork pastry when you are ready to serve.