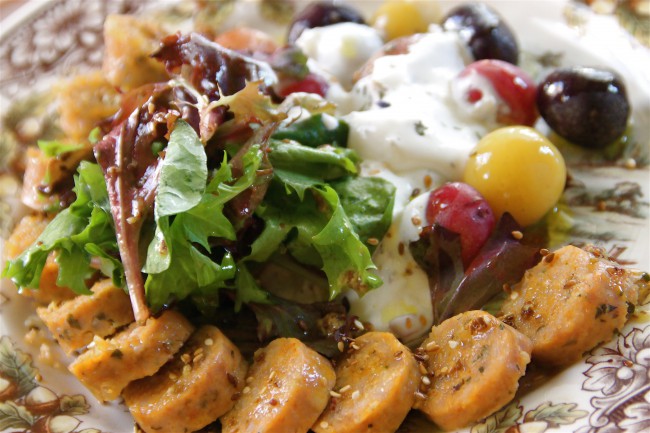 Watch the above video to see how easy and wonderful this recipe is – I think you’ll find it entertaining and informative!

Mix the heavy cream and sour cream together the day before the recipe. Leave covered on the kitchen counter for the day and place in the refrigerator overnight. Mix in the remainder of ingredients when sausage and potato are cooking.

Mix 1 1/2 tablespoons of French mustard with one tablespoon of malt vinegar in 1/3 cup of extra-virgin olive oil. You may add a tablespoon of truffle oil to this for additional earthy flavour.
Just before serving, toss this dessing with mesclun. Save some of this dressing to drizzle over sausage.

Toast 3 tablespoons of sesame seeds in the oven until golden brown on a 275 degree oven in advance. Simmer sausage of choice (make it similar to my video, or buy the best you can find at the butcher’s market) for 30 minutes with small potatoes in a large pan with 1 teaspoon of sea salt and fresh ground pepper on a low heat. After 30 minutes, remove sausage, slice and arrange on plate, drizzled with french mustard vinaigrette and toasted sesame seeds. Place potato on same plate and top with truffle crême fraiche and herbs de province.

Black Truffle OIl for a very distinctive flavour in so many french dishes.